CSF Firewall is an incredible and advanced security suite that let us configure many things regarding how we can handle our network traffic. In this particular case, we can use CSF Firewall to block all access to FTP and cPanel Ports from places where you don’t have any customers.

Let’s suppose you are a local Brazilian company, due to language barriers you don’t have any traffic from other places rather than Brazil, or Portugal (both countries speak the same language, probably share same web hosting market and customers). You can restrict FTP and cPanel Ports access to this countries using CSF Firewall rules.

Remove the following ports from your TCP_IN and UDP_IN variables.

Now, hit CTRL + W and search for ‘CC_ALLOW_PORTS’ and include the countries where you do want to allow traffic from. Following our previous example of a brazilian hosting company, we could allow only traffic from Brazil and Portugal, for example:

Configure those variables as you see below: 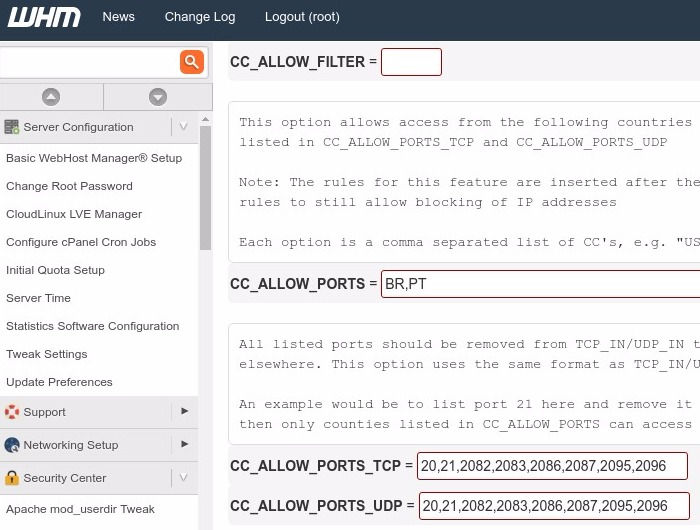 Wait a couple of minutes, and restart csf again until you see something like this:

In order to deactivate this country restriction and allow all traffic from all countries, you just need to do the opposite steps than the previous stated before:

That’s all for today, at this point now you should know how to restrict FTP and cPanel Ports access to certain countries in CSF Firewall, this should increase your security a lot, and you should get less attacks from foreing countries than ever.

If some of your users complain they can’t reach your FTP or cPanel/WHM/Webmail ports, then first check out where are they located from, or if they are using a VPS connection. If they are travelling outside your allowed countries, you will need add those countries to your firewall rules.

About the Author: Esteban Borges